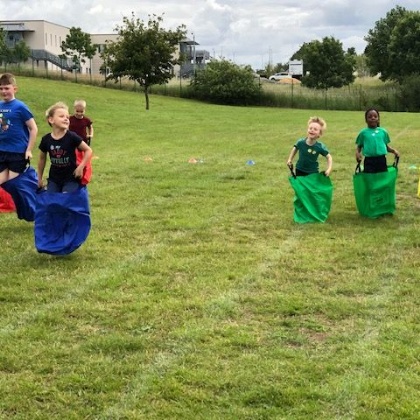 Key Stage 1, including Nursery kick-started the day from 10am. All children took part in the Egg and Spoon race; Sack race and Sprint to name a few representing their houses: Donnington, Windsor, Berkeley and Highclere and earning points if they finished in the first three positions. All the children performed well and we were even treated to some parents’ races before we settled for a whole-school picnic.

Unfortunately the heavens did open and the picnic was stopped mid-way, but that did not stop Key Stage 2 Sports Day going ahead in the afternoon. We altered some of the races for safety reasons because of the rain – but a fab afternoon was had by all and ran just the same as Key Stage 1 adding to the overall scores.

Congratulations to this year’s winners: Berkeley